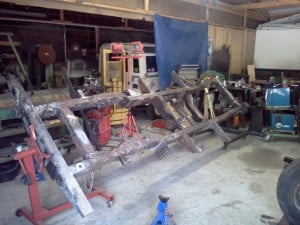 I found working around the frame on jack stands difficult and somewhat annoying. I have seen full Frame Rotisserie in at Summit Racing going for around $1000, and this was defiantly more than I wanted to spend. Fortunately I was given two free engine stands so I decided to just bolt each of the engine stands to either end of the chassis. Surprisingly it works pretty well; it won’t go a full 360 due to the front frame horns. I could have made a bracket to mount to the front frame horns, but it goes far enough that I decided it wasn’t worth the time. 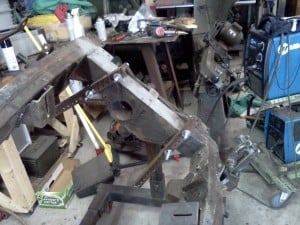 The basic set up was very simple, some 8 inch ½ inch bolts and two pieces each end of angle iron on the backside of the frame and it was done. Now the frame spins and I can roll it around the shop with ease. I will update if all goes terribly
wrong somehow, but as of right now it is working great, and cheap, which is
always good.

Posted in In the Shop, Restoration