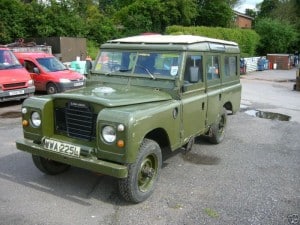 This 1973 Land Rover Series 3 109 Station Wagon most of its life in England, presumably by the sea due to the massive amounts of rust it was carrying around, or the massive amounts of metal it was not, depending on how you want to look at it. In 2008 it made the long trip across the ocean from the Port of South Hampton to Port of Charleston South Carolina, it was then towed an hour south to Beaufort, South Carolina where it sat behind a shop for six months until I happened upon it and promptly purchased it. It then sat at the local transmission shop for another six months while they put a clutch in it and then the poor beast was my daily driver for a year. It was an eventful year (we will get into that later) but finally the Landy?s old bones could no longer support itself and things began to fall off alarmingly fast. I then pulled it into a rented garage space to rectify its many issues, expecting the work to take 6 months max. Fast forward to today, two years later, and the work is going strong. Over time I will chronicle the work I have done and the current stuff I am working on, mostly so the unlucky few who stumble upon this site can learn from my mistakes, and the occasional idea the works well from concept to implementation.
Check back often as the updates will keep on coming