Ten Reason not to buy a Series Land Rover 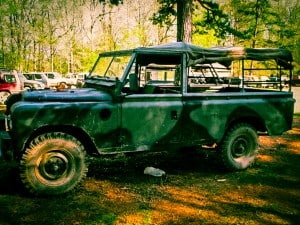 So you want a Series Land Rover because they are just so cool. Here are 10 reasons why you don’t want one, in no particular order…

1: They are Slow. Really slow. Most Series Land Rovers top at around 50 MPH, and that is flat out. If you have an overdrive you can get up to 55, but your fillings will fall out.

2: They are noisy. Between the engine noise, transmission and transfer case whine, rattles, shakes you will not be able to hear yourself think, let alone carry on a conversation.

3: They are way overpriced. For some reason the North American Land Rover market is willing to pay crazy money for Series Land Rovers. They routinely sell for $12,000 to $20,000 for Land Rovers that need work. Compare prices to the UK or Australia to see what we are on about.

4: The bodies are Aluminum. This means they dent easily and are hard to repair. With the youngest Series Land Rovers pushing 30 years old, the aluminum is old and brittle. It tears easily and is almost impossible to work on. Added to this, the use of steel and aluminum in close proximity causes galvanic corrosion (“rust” for aluminum), which is a real pain to fix.

5: The frames are rust prone. The steel box frame collects water both inside and on the top of the frame. Unless the truck has a replacement-galvanized chassis, there is going to be rust in the chassis– any even if you do have a galvanized chassis, you might still have rust. Land Rover chassis collect water, that is just what they do.

6: The parts are expensive. NOS parts are crazy pricey. Cheap reproductions are around but are not cheap either.

7: They leak. The doors, the windows, the floor, they all leak. If it’s raining, you are going to get wet.

8: They are underpowered. The 88’s are ok, but a 2.25-liter motor is not enough to push a 109 around empty. Let alone loaded. Acceleration is almost dangerously slow.

9: The brakes are not great. They use two leading shoes, which means more stopping power when going forward, but almost nothing when you are going backwards. Also they don’t stop when the pads are wet. Or if your hubs are leaking, which if it’s a Land Rover, they are.

10: They leak part II. And they leak a lot. They will turn your driveway into an oily mess. The motor leaks, the transmission leaks, the transfer case leaks, the axles leak, the hubs leak. If it has oil, it’s going to leak. They will cover everything with oil. Don’t be surprised by a quart of oil per month.

Bonus Round: Lucas Electrics. Lucas is known as the Prince of Darkness for a reason.

Would I own anything else? Absolutely not!