After driving the Series 3 for a year and a half with the
stock 2.25 liter motor it became very apparent that more power was needed. While the stock motor on the 88’s in plenty peppy and passable for daily driving, the added weight of the 109” takes its toll on the stock motor. 0-50 took somewhere in the neighborhood of 45 seconds. More power is defiantly in order. After kicking around a bunch of options, such as a Chevy 350 or Cummins 4BT Turbo Diesel to NV3500 5-speed manual transmission to Land Cruiser Transfer Case, a 1988 Range Rover Classic was given to me. 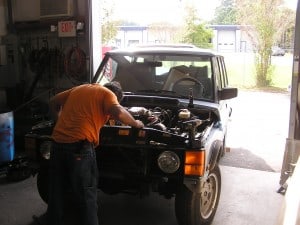 Getting Ready to Pull the Classics’s Motor

The Range Rover would only run for 30 seconds (the ECU was shot) and the body was completely rusted out (the door posts were rusted out so
the doors opened up and out) but it only had 70,000 miles and had been well
serviced, and the drive train seemed to be solid.

One Friday after work I rounded up a few friends and pulled it into the shop the pulled the drive train out as one unit, it only took about 3 hours to pull the motor. 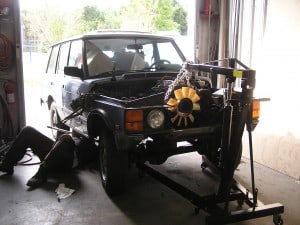 Don’t forget to remove the driveshafts!

1987 was the first year the Range Rover was sold in the US, and from what I read online the 87-88 Classic are the best donors for the series conversion, if an automatic is desired. It has the 3.5 liter aluminum block V-8 motor, ZF4HP22 automatic Transmission, and the LT230 locking Transfer Case (this is pretty much the same setup that is run on the NAS Land Rover Defenders).  More information and specifications can be found Here.

If you are going to go the donor truck route for your engine
conversion, I recommend pulling as many parts as possible from the truck before
sending it to the scrap yard, I only took the drive train, and regret not
pulling more parts from it, such as power steering gear box, steering column,
axles and so on. 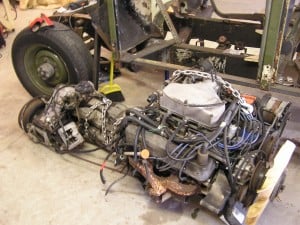 Stay tuned for articles detailing adding a carburetor and
fabricating motor mounts and everything else that is involved in adding V8
power to the series Land Rover.